Conspiracy theories have always been with us, but they have become extremely popular in recent years. Offering simple answers to extremely complex questions, they are seductive to those who do not examine issues too closely. They also appeal to those who harbor deep-seated resentments against "the rich," "the powerful," "the Jews," or whatever other group a person might envy and wish to see brought down. (See my book Resentment Against Achievement for a great deal more about this.)
Read my column about a recent Conspiracy Convention: Conspire This!

But the important thing to remember is that all "cosmic" conspiracies are false. Certainly some conspiracies do exist. Individuals routinely conspire to commit illegal acts: this is known as "organized crime," and its existence is never doubted. Nations sometimes "conspire" with other nations to achieve common goals: this is known as "strategy" or "diplomacy," and while the aims and methods may sometimes be murky, its existence is undeniable. But "global" or "cosmic" conspiracies make claims going far beyond this. "Global" conspiracies claim that the important events affecting the entire world are being driven, and indeed may have been driven for centuries, by a group of hidden rulers, pursuing its own secret agenda. Often there are extraterrestrial or other paranormal claims introduced into the conspiracy. What is invariably lacking is any hard evidence backing up the claims. Typically, conspiracists cannot agree who the secret rulers are, what they are doing, and what their aims may be. But conspiracists seldom debunk each other (even though if A is correct, then B, C, and all the others must be wrong): instead, they reserve their scorn for those who deny that the human race is little better off than puppets on strings, unaware of the actions of the puppetmaster. 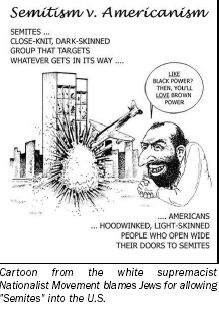 Conspiracies about the Sept. 11, 2001 Attacks on America

A compendium of 9-11 conspiracy claims from crank.net. ("Cranks, crackpots, kooks, and loons on the net.") Fringe, Cranky, Crankier, Crankiest.

Do You Believe the 9/11 Conspiracy Theories?

The Anti-Defamation league prepared a report showing how many of the 9-11 conspiracy theories originate from anti-Semetic groups and individuals.
And since most people these days won't take seriously wild theories blaming "the Jews," when writing for a mainstream audience these conspiracists are a bit more vague about who they blame.

The left-wing political activist Chip Berlet debunks the conspiracy book The New Pearl Harbor by David Ray Griffin (for those of you who won't believe "the establishment").

Conspiracies about Groups that Secretly Control the World

Popular Conspiracy author David Icke writes how a group called "the Illuminati" have "been holding the reigns of power in the world since ancient times." The Illuminati is in fact the secret bloodline of "the Reptoids," a race of space aliens who bred with humans to create a royal lineage, which includes (of course) "the Rothschilds, Rockefellers, the British royal family," as well as most presidents of the U.S., including both Bushes, and Al Gore, as well.

According to the industrialist Henry Ford, the Jews are working to secretly control the world, and are "the world's foremost problem." (This on-line book is hosted on the website of a 'Holocaust denial' organization, which vehemently denies being anti-Semitic.)

The "We Never Went to the Moon" Conspiracy

The claims: Bill Kaysing was the first to claim "we never went to the moon." (He doesn't think John Glenn went into orbit, either.)

The Facts: The Bad Astronomy site has an in-depth refutation of the claim that "we never landed on the moon."

Even the space conspiracy crackpot Richard Hoagland (who believes NASA is covering up Martians) agrees that we did go to the moon.

The claim that the CIA had Kennedy killed began as cold-war disinfo from the KGB (and the author of this article writes for the leftist publication The Nation). 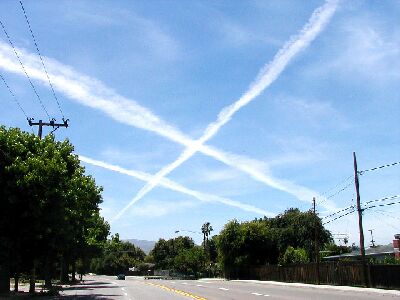 The claims: Various cranks are claiming that wide, flat contrails are really "chemtrails," a covert government operation pumping chemicals into the sky for purposes speculated as anything from weather modification to deliberate poisoning of the population.

"Chemtrails" from Surfing the Apocalypse.

There is even a Contrails WebRing!

The Facts: Under certain meterological conditions, high-altitude contrails can serve as a catalyst for the growth of cirrus clouds that sometimes expand to enormous size. In other words, what starts out as a small contrail sometimes seeds the growth of a huge cirrus cloud. You will note that so-called "chemtrails" are seldom if ever seen except in the presence of cirrus clouds. However, if they were actually "posion spraying," this correlation would not exist, and they would be seen just as often in skies with cumulous clouds, or with no clouds at all.

The New Mexicans for Science and Reason have an excellent page debunking "chemtrail" claims.

The vaccines you get are poisoned! And AIDS, Ebola, and other viruses are deliberate laboratory creations.

Go to The Debunker's Domain